Love is a lantern

Wild and free like the hills in the highlands

Hope is a breeze that brings me back to dry land

Where the flowers grow

~From a Passenger song, Coins in a Fountain

A day of small surprises unfolds.

Each afternoon when the wild spring winds aren’t too cold I do my daily meditation in the back yard.  Being of the persuasion that “whatever works” is the right position for this, I tilt my wheelchair back, raise the footrest and face the blue, blue sky with its numerous scudding clouds.  Diaphanous, black and scary by turns, they are.  Tree branches jerk and sway under 30 mph pummeling by those winds.

Today when I opened my eyes I had to wonder if I was still in the same place — there was a large flock of seagulls fluttering above me.  Two dozen, perhaps.  Too high up, they were, for any sort of iPhone photo, so I simply observed them as something of a miracle.  That many gulls in the middle of the high desert?  Gulls happen, yes, but this many?  Most often they’re singletons — but here?

I’ve seen gull groups flying like this in gales on both the Atlantic and Pacific Oceans.  But not before in the high desert.

Will the shallow Rio Grande just east  be enough for them to rest the long, slender and weary wings?  These white, short tailed creatures with herringbone looking underwing coverts are pushed up and down like corn popping in a movie theatre, tossed this way and that as they generally aim for the northeast.

I take their appearance as encouragement for moving my achey old bones into the dreaded packing project that heralds the move back to California — where there are lots of gulls, armies of ‘em — in early May.  Assuming that the house sale goes through.  Which I am.

Why do I assume this?  Because I am drop dead terrified of the thing, that’s why.

It is clear that there will be relief in escaping the frequent wildfire warnings this region endures during windy spells when the relative humidity is 10%.  Such as now.  Western wildfires are well worth being terrified about, planning evacuation procedures about, praying they don’t come anywhere near where one lives.  Fires have frequently ripped through the bosque (forest) along the river those lost seagulls may have been aiming for.  Many cities and towns, including this one, lie along the Rio Grande.

Lots of other, better reasons exist to channel said terror into getting on with it.  So why have I been feeling rather off for the past few days?  Somebody may understand, but that person is not me.

I have not entirely shirked working on the project.  My head is abuzz with plans.  Categorizing my stuff according to where it goes, how best to get it there.  Putting off the actual implementation, which will take physical energy.  Lots of physical energy, and not my forte.

Energized by the powerful birds being dashed about by fire weather winds — yet still holding their course, back into the house I go with enough speed that Elf and Opus race excitedly around me.

Not the least of today’s gift of little surprises are the welcome waves of energy — I immediately began sorting through mountains of tools and a trunk stuffed with old, some very old, family memorabilia.  Nice contrast between these projects, yes?

A good thing, this energy, since there are about six weeks left before the sale of my house closes, and off I go with my daughter to where she now lives in California’s Silicon Valley.  With Elf the Corgi and Opus the Dachster stuffed in there somewhere.  Hopefully not too excited at the time.  They are not used to long drives.

The most notable tool I set aside to keep is a huge antique wooden mallet.  Lovely for

closing paint cans or beating up a pillow at moments of frustration.

From the family trunk emerged a small envelope tightly closed with a rusted paper clip.  It was simply marked “Yester-year”.  To my astonishment it was filled with typed poems, possibly written by my aunt Mary Lee’s first husband, while he was stationed with the US Navy in San Diego, and she was back in his hometown, Pembroke, Massachusetts.

He addressed her as “Divinity Lee” as he poured out his love, admiration and hopes about her.  Apparently, from his tone, she responded indifferently for a while.  Eventually Mary accepted him as her future husband.  I couldn’t help wondering how well the two had actually known one another, back in Pembroke.

Given the passion expressed in the poems,  whether or not they were entirely original, it felt especially sad to me that their brief marriage ended shortly after World War II.  His raging alcoholism was the reason.  Two babies miscarried, so the one dependent Aunt Mary took custody of was their glorious big collie, Sandy.  Henry eventually remarried, to another alcoholic.  Unfortunately, so did Mary, but that union was short-lived.  She was left with a big German Shepherd dog she called Tina.

Here is a rather philosophical tidbit Henry probably copied from another source.  In searching for an author all I could find for attribution was “Unknown”.  Who knows, maybe he did write it.  It was published in a lot of newspapers during the war, mostly in Texas:

Just so many, all slender and trim

Waiting in a row

To be selected, set aflame, and

When their flame has died

These are more exclusive.

If the brand is good,

They aren’t given away.

And become more attached to them

The older they become.

When the flame is burnt out

They still look after them,

And care for them always –

No man shares his pipe.

As an example of sexist “wisdom”  this one caused me to shake my head in gratitude for not living back in those days.

This small collection of poems neatly typed on onionskin paper brought my aunt vividly back to me.   She who did much to keep me going during the years I spent in rehab hospitals, recovering from paralytic polio, learning to face life again.  Calm and steady, she visited me there,  with her sister Harriet, every weekend during those long years when my mother was severely depressed, emotionally unavailable to me.

She was there for me through my teens and 20s, till I left Massachusetts for New Mexico.  She listened, concealing her smiles, to my folk music, helped me prep for high school SATs, collecting me for a special dinner once the test was taken, gave me cash as well as presents at Christmastime during my college years, read my columns and stories faithfully during my news reporting years.  We shared many long, talkative dinners in the 1692 colonial she had painstakingly restored on her own, from the time I was 12 till I left at 28.

So reading Henry Melanson’s love poems, sensing how glamorous, calm and “divine” he believed her to be, introduced me to a phase of her life that I knew very little about.  A surprise in a small envelope amongst yearbooks from Mount Hermon and Harvard, portraits of family members in the early 1800s, old war letters from my dad,  a few relics from after my birth.

If moving is the catalyst for me finally digging into this big trunk, it’s a good thing.

Heaven help the rest of the stuff I need to get done.

I’ll let Passenger have both the first and the last words today:

~also from Coins in the Fountain

Several items that emerged from the old family trunk:

The “no man shares his pipe” poem, neatly typed by my aunt’s first husband.

For 72 days between November 1889 and January 1890 journalist Nellie Bly travelled, alone, around the world in emulation of a character in a Jules Verne story. This board game honored the legacy. It emerged from my old family trunk. 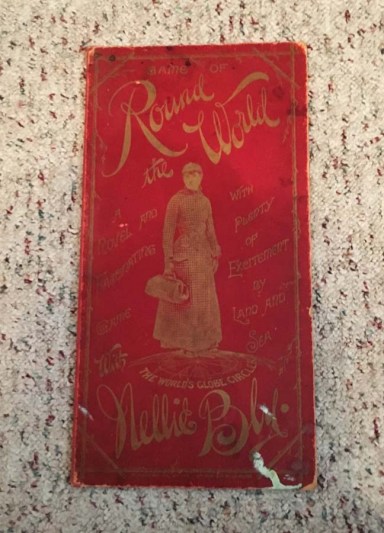 Back of the Nellie Bly board game — Around the World