Hurry up and wait.  That’s an expression I grew up with, and lately it’s been coming back to me. With a vengeance.

Today I was intending to be writing from south of San Francisco, dogs in the park, bonsai relocated to a second floor condo balcony.  My daughter and another roommate nearby.  Green, green, everywhere!  So different from the dry brown desert that’s been my home since 1994.

But… life proceeds in mysterious ways, doesn’t it?

Trying out Apple Music, I discovered that I rather like Mary Chapin Carpenter.  That a couple of lines from her song The Age of Miracles could be my theme for this little epoch in my life:

One day I’ll get up that hill

In the age of miracles, is one on the way…

Several times now a closing date for the sale of my house has loomed large — tickets have even been bought by my California helpers — only to be moved back a week or ten days.  Right now it looks as though it will be either the end of this week or the first part of next.  Then, bizarrely, it will take three days for the buyer’s loan to be funded.  Hence, I must wait an extra three days to have the money to pay for my wheelchair van, which will be sent from near Atlanta.   I’ll be lucky to be in residence near the deep blue sea as the second week in June begins.

But who really knows what the timeframe will turn out to be?

My belongings are as packed as I can get them without a) help, and b) missing things I really do need on a regular basis.

The default state of my mind of late is in a proper dither, half here and half at my new digs in the Silicon Valley.  Concentration comes and goes — causing me to do some really, really dumb things.

For instance, today I was out in the backyard in the warm early morning sun, doing a bit of weed whacking with my ancient rechargeable whacker that’s about ready for the great tool cemetery in the sky.

A tiny spider parachuted down onto the wheelchair footrest.  Reaching towards the ground for a small stick to encourage Spidey to climb aboard for relocation, I was not mindful that one foot was on the edge of the footrest and …. out of the chair I more or less rolled, splat onto the ground.

Spidey now owned my wheelchair, and there was no way in the world I could get myself back up. My arms no longer have the sort of strength for that.

My house is, unfortunately, a locked fortress, so even if I could think of a friend or neighbor not at work to call for help they wouldn’t be able to reach me.

Leaving that one unthinkable choice.

There was I, under the awfully hot sun, pushing my butt along, across the yard, the wide concrete area in front of the garage, through the garage — why in heaven’s name didn’t I sweep this place out??? — up the ramp and through the backdoor, down the corridor and into my bedroom.  There I have the means of getting my aged frame up off the floor.

From there I can get dressed again.

This was another one of those accidents in life that I had promised myself would not happen to me.   Just wouldn’t, because it would be impossible to get through it .  Another such event I wrote about recently — when my wheelchair stopped dead in the middle of the street, leaving me stranded with two bags of groceries on my lap.

Coming at me kinda fast, wouldn’t you say, Self?  Universe sending me a message or something?  That I sit here in my den, dogs by my side, writing this is proof that we can, indeed, get through things no matter how much time we once spent worrying about them.

This whole process of falling generally provokes anger in me, as it does feel rather excessive to go through these things that I dread so much, when for one reason or another there is no one who can help.  So I said a special prayer, known to Baha’is as the Remover of Difficulties as I hitched myself along, inch my inch.

Is there any remover of difficulties save God?  Say, praised be God, He is God, all are His servants and all abide by His bidding.

I put that in so that, if you are so minded, you can use it for help when you need it.

Elf stuck close to me, as she does when I’m in trouble.  Here she is, showing off recently with her jolly ball, in the general area where gravity had its way with me today: 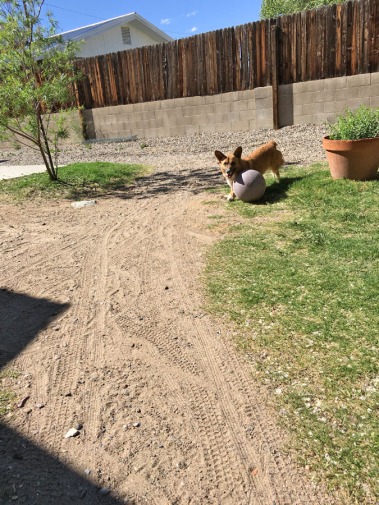 It had taken me forty minutes to get from the ground back onto my feet.  By then I was shaking like a leaf in a breeze.

Thanks to the shaking I couldn’t get down the ramp into the garage on my feet — for fear I would lose my balance and have to start all over again.  So I made my way back through the house and out through the laundry room door, plodding ever so slowly along the gravel driveway to where I’d parked the wheelchair in the shade.

I hoped Spidey had vacated to live out her life in the backyard where she belongs.  But I didn’t spend much time looking for the tiny creature.

Instead I went in, got thoroughly washed, realized that the slip-sliding across the concrete and rocky areas had ripped great holes in my favorite pants AND my favorite Chuck Taylor sneakers.

I was so mad that I immediately went to Converse online and replaced the shoes with something similar.

My new braces now have serious scratch marks in the plastic backs below the knees.  Oh, well, they weren’t going to stay new looking for long, were they?

To keep myself from reflecting too profoundly on how stupid it was to reach for something on the ground without being firmly in control of gravity I picked up my Apple pencil and small iPad Pro with a sudden vision in my head.  Fortified by a cup of tea and a pear.

A couple of years ago there was an unbelievable sunset over the west mesa.  The colors, the blaze of the sun — and four or five of the strangest clouds I have ever seen. Unable to get a photo, I have tried many times to capture the essence of that sunset.

Today I found a way to get it in such a way that at least I recognize what I had seen.  Not much of an artist when the surfaces I create on are flat, the thing has its lacks. I left out  the clutter of buildings and trees between me and the mesa, too.  The mesa goes on for scores of miles, has roads, business areas and some homes hidden  along its barren, heavily eroded slopes.

New Mexico is known as The Land of Enchantment.  Truth is, it has a lot of utterly surreal, nearly unbelievable visual effects.  If you don’t believe me google up the Bisti Badlands sometime and just look at the images.  Georgia O’Keeffe wasn’t making things up in those famous paintings half as much as people think she was.  Those visions are THERE, once a person becomes imbued with the New Mexico spirit.

This image I did my best to sketch rudiment-ally is a vision that I will long carry with me…  Yes, it is hard in some ways to leave this place I have loved for so long.  But … I still can’t wait for that closing day to finally get here.  Then three more days after that…  Then:  GREEN!

2 thoughts on “In which I learn the respect of gravity”