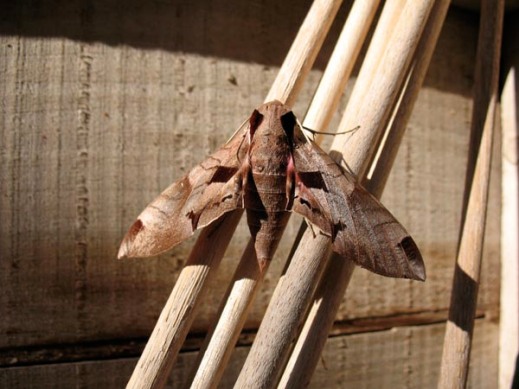 Before going outside this very warm, brilliantly blue afternoon I looked at photos of an Achemon month.  The creature emerged from its chrysalis near some wooden dowels in the courtyard of my previous home.  Creeping  up the dowels, it clung for several hours, pumping up its wings.  Eventually they measured nearly four inches across.

It, and its descendants, feasted on poinciana flowers close to the courtyard.  This happened in July, 2008.

Nothing like this velvety moth has appeared at my home of the past six years. Feeling a bit nostalgic for the many lovely flowers, birds and butterflies — along with the occasional fascinating insect — at my South Valley place, I raked dead leaves out of equally brown grass for a while, then put my feet up to take stock of plum blossoms swelling up nearby, the glossy condition of needles on a backyard ponderosa which is fighting off a bark beetle infestation.  With the help of way more watering than I ever thought I’d be giving a large tree in the desert.

Meditating a while, I opened my eyes and there was a small miracle, dancing in and out of tree limbs high above.  Too tiny to identify from my distance, they were brilliant hairstreak-sized butterflies, come to show off spring’s orange amidst the infinite shades of desert brown.  For about five seconds, weaving in and out of the light amongst the great trees.

twinkling with the sun

While there was no time for a photo, here is a picture of Elf the Corgi a couple of summers ago, nosing agastache flowers where she Just Knew There Was A Butterfly.  Somewhere.